The new economy owns your soul

Sally’s choice was this: either pay the heating bill or fix her car. She chose the car because without it she couldn’t get to work, and if she couldn’t get to work, she wouldn’t be paid. Sally is a personal support worker making $15 an hour after a decade on the job. But today, on one of the coldest days in December, she’s walking the picket line, on strike for a better deal. She’s not sure how long she can afford to do this because, while she’s on the line, she’s making $0 an hour.

Katie’s been working been working for fast food chains for over a 15 years. She’s now the afternoon shift manager at a big multi-national and earning a dollar more than minimum wage. She’s got two children in school and she’s in debt to a pay-day loan company. She tells me she might go back on social assistance. At least that way she’ll be able to see her kids.

April 28, National Day of Mourning for workers killed or injured on the job. 1,000 a year killed in Canada.

Charlie wrecked his back dragging rock out of a limestone quarry. The doctor at the ER said he should rest it for at least 6 weeks. But that’s what’s left of the work season. There’s no union at the quarry, so no benefits, no time off if he’s sick, no one to back him up if his boss tells him to do something dangerous. So he does what he’s done for the last week. He drags himself out of bed, downs an OxyContin with his coffee and waits for his buddy to pick him up.

These are not their real names, but their work is real enough: low wage, part time, temporary work. If you’ve got a family to raise on that kind of work, it’s all guts and no glory. It’s soul crunching. It’s precarious work and it’s a plague that’s spreading. Half the jobs in Toronto are precarious. Almost 95% of the jobs created in Canada in 2013 were part time, filled, more than likely by workers over the age of 55.  Part time jobs suit some people. But that doesn’t mean they’re good jobs.

Good jobs, the kind of jobs that give you a middle class income, benefits, the protection of a union—those jobs have skipped town along with the companies that paid for them. Some think those kinds of jobs will never return. The Wall Street Journal thinks that. Temporary work in the US has nearly doubled and that includes manufacturing jobs. Good for employers, lousy for workers.

Politicians point fingers. It’s what they do. They point them at one another mostly, but over the last few years they’ve been pointing them at unions. But if they checked their history, they would discover that it was unions that helped shrink the yawning economic gap between those who had it all and those who didn’t.

Membership in private sector unions has shrunk from around 70% to about 30%. Not coincidentally, inequality has risen, back to the level it was in the Roaring ‘20s—the last hurrah of what Mark Twain called “the Gilded Age” of the robber barons JP Morgan, Andrew Carnegie and John D Rockefeller.

Eighty-six people in Canada hold more wealth than our poorest 11 million. That’s dangerous. Researchers in the UK, have found that as inequality in a society rises, so do social and health problems—overcrowded prisons, obesity, diabetes, teen pregnancies, shorter life spans, social distrust. They rise or fall not with the degree of poverty or wealth of a nation, but with the degree of inequality in a nation.

The Conference Board of Canada gives us a ‘C’ on equality. Out of 17 similar economies, we are 12th, just ahead of Japan but behind Ireland and France and way behind Denmark.

But the most telling statistic is our rank in the world on working-age poverty. We are third from the bottom. Canada, along with Japan and the US have the highest rates of working-age poor—higher that Italy, Ireland, France and 11 other countries. Ours is not a healthy economy.

And neither are we. Doctors are seeing the impact in their clinics. Over half of us are over weight or obese, one in five has hypertension, well over half do not or cannot afford to eat properly. When you’re tired out, stressed out and tapped out, that $1 bag of french fries looks a lot better than a $5 bag of apples.

A US study takes, as a measure of financial fragility, whether a household can come up with $2,000 in 30 days. That’s another feature of precarious work: you have very little wiggle room. $2000 is a car repair or a medical bill away from fiscal ruin and 50% of Americans are there.

Thank God and Tommy Douglas for Canadian health care. The trouble is all those frozen fries and chicken nuggets might be cheap at No Frills, but they’ll catch up to you eventually.

Pointing fingers (unless you’re in front of a mirror) is never a useful exercise. Let’s do it anyway. Let’s point them at the service industry where most of the new jobs are going. 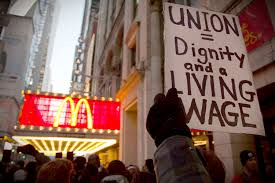 McDonald’s says if it raised its employees’ wages so they could actually live on them, it would have to charge $20 for a Big Mac. And yet, in Australia, where the minimum wage is over $16 an hour, Big Macs are only six cents more.

McDonald’s workers in the US who are having trouble living on their McWage can phone the McResource hotline. There someone will explain how to apply for food stamps and Medicaid.

How McDonald’s helped its US employees get by. The McDonald’s PracticalMoneySkills.com site (brought to you by VISA) has since been taken down.

The chain is only one of many companies that off-load their operating costs onto the public purse. Food banks and our universal health care system obscure the public cost of precarious work in Canada but, in the US, big fast food costs US taxpayers some $7 billion every year.

Big box retail is just as bad. What they pay, even for full-time work, leaves their employees below the poverty line. Do you know what it would take for the chains to raise their employees and their families (some 3 million people in North America) out of poverty? Thirty-six cents.

Yup, 36¢ more per shopper per basket would do it. I don’t know about you, but I’d be happy to pay a bit extra every shopping trip if Walmart and Target and Canadian Tire put my 36 cents into the pockets of their employees.

In the US, Walmart does a brisk trade in food stamps (now called SNAP—Supplemental Nutrition Assistance Program). The chain nets about 18% of all food stamp dollars, worth about $14 billion.

We’ve created a new class of service employee, one whose wages are so low they can’t afford to shop anywhere but where they work. Reminds me of that old song from the Dirty 30’s Johnny Cash used to sing: “ … and what do you get? / Another day older and deeper in debt. / Saint Peter don’t you call me ‘cause I can’t go / I owe my soul to the company store.”

Are there answers? You bet. Here are some:

Ignore the ideology. Get the facts:

David McLaren is an award-winning writer. He has worked in government and the private sector, with NGOs and First Nations in Ontario. He is currently writing from Neyaashiinigamiing on the shore of Georgian Bay and can be reached at david.mclaren@utoronto.ca. In February 2015, he won the nomination for the NDP to represent the riding of Bruce-Grey-Owen Sound in the 2015 federal election. See that page for writings during the campaign.
View all posts by David McLaren →
This entry was posted in All Categories, Labour, The Economy and tagged dissent, ecomonics, labour, precarious, work. Bookmark the permalink.

1 Response to The new economy owns your soul